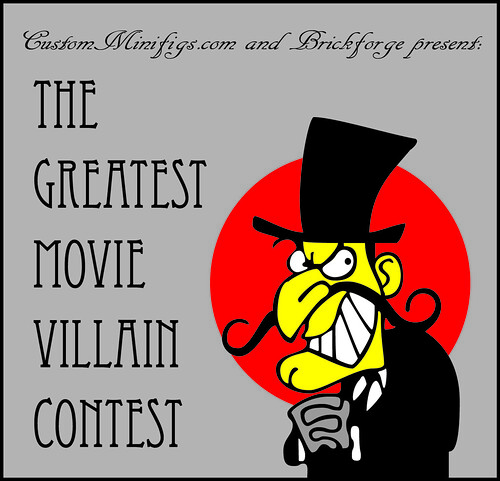 as i’ve shown you examples of the prizes on offer i figured i’d pass on the news that customminifigs.com and shmails/armothe and brickforge have a GREATEST MOVIE VILLAIN CONTEST.

as you’d expect its all about custom minifigs –
Build a custom Minifig of your favorite movie villain. This character can be from any genre, theme, or period in the history of movies. Include a short desciption of the villain, the movie they appeared in, and why they stand out to you as the greatest of all time.

– All types of customization are allowed: decals, paint, 3d printing, sanding, cutting, etc., etc.
– No digital entries, the figure must be made in the real world.
– Figure must have one Brickforge item, but can also include items from any other custom house.
– One entry per person (you cannot have two favorite villains!)
– No digital enhancements other than basic photoshop type work (brightness, contrast, etc.)
– No scenes or moc’s. The figure should stand alone. You may put the figure on a baseplate or stand, but the figure is all that will be judged.
– Three picture maximum plus 1 reference picture (not needed). No max. size.
– Entries must be posted in the entry thread on the Brickforge forums before the time and date of the contests conclusion to be eligible to win.
– All entries must be new as of the posting of this announcement. No existing figures or previously posted figures will be eligible.

The contest will start on March 1st and will conclude on April 15th at 11:59 pm est.

Winners will be based on accuracy of the minifig to the original character, use of custom elements, and the overall execution of the final figure.
Judges: Shmails, Omicron, Thrash