Like the use of the visor on the minifigs helmet and check out the modified weapon, really cool! I think the minifigs torso is custom, but i’m not totally sure, pretty cool it would be nice to see more of these custom minifigs in a vignette 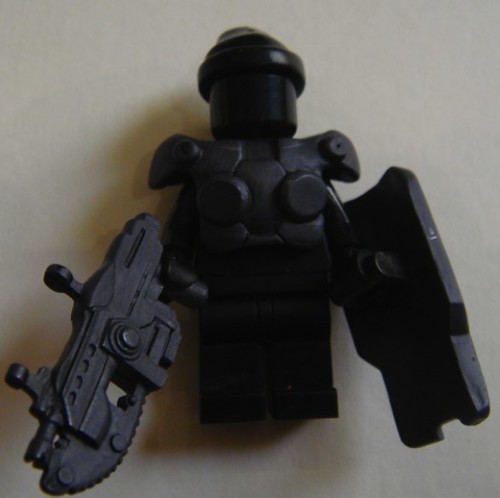 Whilst there’s no custom minifig in this image, I wanted to show it as there is a whole range of items that would really help kit out a vignette and set the scene for any custom minifigs, take this custom made weapons box, it would look great in a WWI setting.

One of the Most elusive custom minifig modders I’ve come across is Hazel, I can’t seem to find much on they guy, other that some of the most incredible and detailed custom minifigs I’ve ever come across, it seems that Hazel is based out of south east asia, in Hong Kong and/or Japan, and with classic asian skill in detail the figures that really made an impact on the custom minifig community were Hazel’s gears of war custom minifigs, Hazel was associated with Amazing Armoury and most of Hazel’s custom minifigs are shown with the tag – ‘custom by Hazel’

Hazel usually goes by Hazel – Fantasy and his works include MOCs, custom minfigs and custom minifig parts and weapons. His work has also been featured in Dengeki Brick magazine in 2008 (issue 12).

The custom parts by Hazel seem to be made in small custom runs and are probably highly sought after collectibles.

I’m trying to get in touch with Hazel to do an interview and also to buy some of his work, so if any of you have every dealt with Hazel, please do get in touch!

The Arrival of BrickArms Custom minifigs and weapons

I arrived home today to a small nondescript package with a little sticker on the bottom the sticker sad minifigforlife, so after a long day at the office my spirits were lifted, just time for Christmas and a few weeks off. This is the first time I’ve received anything from Brickarms and Minifig for life so I was eager to check out the merchandise that to be fair, its the cheapest items you can buy.

Opening up the white bubble wrapped envelope each order was packaged in a clear mini ziplock bag, with the mini fig separate from the weapons that came along with that particular minifig. Each packet also came with photo/printed label of the order and minifig, and there weren’t any instructions (not that you would need any).

upon opening the first item, the Mr White that I was very keep to get my hands on (i suspect this will eventually be a collectors custom minifig in the future) I was very impressed with the decals, BrickArms claim that the decals are delecate and as such these custom minifigs aren’t playable minifigs, but collectors minfigs, meant to be looked at rather than played with. All the joints on the minifig were stiff and solid, and there were no chips or scratches on the minifig, which was great. Suffice to say this minifig was in pristine condition.

On to the weapons, I’d orders as many items as I could from Brickarms before they temporarily shut shop, may main worry was cause of the media attention that had brought them into Lego’s radar there might have been some implications which might have meant you wouldn’t be able to get ahold of any of these minifigs or minifig weapons. (lucky that proved to be wrong!)

The minifig weapons are really well made, the level of detail and the finish on them is supurb, and because they are made from the same plastic as Lego minifigs, which gives them a ridged and strong quality that hints at quality. SO after stashing a few of these minifigs away unopened I’ll definately be ordering a few more and begin work on my custom Lego minifig british army chess set!