I really like the visor on this custom minifig which as altered to accommodate a groove in the visor, also, you’ll notice the custom brickarms rifles which have been modified, whilst the silver paint is really stong, this still makes an excellent space, sci-fi themed custom minifig.

Posted on February 5, 2009 by Custom Minifig

Whilst not totally usable this Custom Minifig M4A1 looks the business, and any custom minifig with this weapon would be true one man army, it looks brilliant and its pretty amazing to think its minifig scale, the finish isn’t too great but if you look past that it’s pretty sweet. 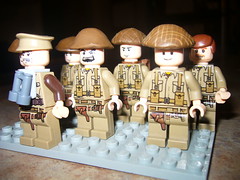 I really am starting to like WWII minifigs, they brilliant to make and offer a whole range of customization opportunities, these Canadian trooper custom minifigs are a good example, the captain has a pair of binoculars hanging from his neck buy using a Lego accessory, the helmets are all custom made, each minifig has a different face, and the decals on the minifigs torso look custom, whilst the legs are from the Lego Indiana Jones minifig.

There’s been quite a lot of discussion on how to make bullpup designed rifles for custom Lego minifigs. Essentially a bull pup designed rifle have the magazine behind the shooters firing hand rather than at the from, and example with be the FAMAS or SA80A2. Now the problem with this weapon design as opposed to, lets say the M16 for example, is when converted to Lego form, the arms of a Lego Minifig mean that there is an innate difficultly presented by the bull pup design, cheifly because the Lego minifig arm simply wouldn’t allow for a weapon butt.

Now the thing is for my custom minifig project, I want a bullpup weapon, so I’ve thought a (at the moment) theoretical way to get around this. rather than having a formal handle the custom Lego weapon will have a clip of some sort that goes round what would essentially be the Lego minifigs thumb. this would shift a large part of the bullpup weapon to one side which would then allow for a better positioning to allow for the larger butt of the weapon, if more space were needed, then one could carve out part of the minifig weapon so that it fit snugly to accommodate the thickness of the minifigs arm.

There are some short comings to this custom minifig weapon design however, for one, the Lego minifigs arm wouldn’t be able to move, it would have to be straight out in front of the minifig when holding the weapon, so not very good for vignettes. The other glaring challenge is that the custom minifig bull pup weapon will not be a totally genuine replica, for one there wouldn’t be a handle, but a hand-clip, for another there would be a part carved out to accommodate the mini fig arm. But overall, I suspect this is about as close as we can get to a custom minifig Bullpup weapon variant.

Here is a rough computer sketch of how it might work, notice the hand clip