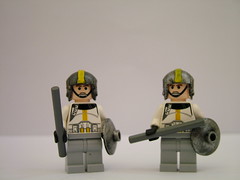 the Lego riot police custom minifigs are really nice, the helmets and torso are from Lego starwars, but the helmets and shields are painted, which strangely actually works quite nicely.

this custom minifig has a really unique gas mask, a custom gas mask has been something that custom minifig makers have been mulling over for a while and there are quite a few different approaches to making one, typically it involves a single round stud. aside fom this the minifig has a brick arms flashbang and shot gun, whilst the minifig torso is from the Lego starwars series.

Posted on February 1, 2009 by Custom Minifig

This Robot MOC is pretty impressive, its got loads of fuctional ball joints and the blue and red police light fixture is awesome, even better still is the minifig Jail that can fit a minifig comfortabally inside, its really cool.

Here’s a quick snap shot of some of the soon to be released minfigs from the space police set,the things that really stand out are the new half torso, alien head, and some new helmets which seem to be very manga/japanese influenced, just imagine all the cool customizations you could have with these. The decals seem pretty cool too.