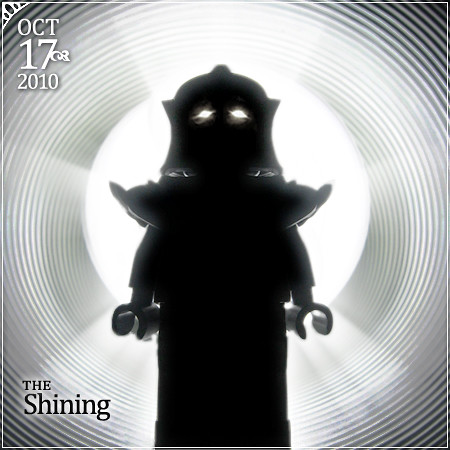 another great piece of morgan photoshop and minifig art. the eyes really highlight the eeriness of this minifig.

and below, more from our interview with the custom minifig maestro –

Alot of your minifigs are quite purist with a limited use of all the various custom minifig parts available, was this a deliberate choice on your part? why?

I’m inclined to say it’s deliberate, for the most part. I like to approach customization from a “hypothetical” standpoint: what if LEGO made an already existing piece in this color or that color, that sort of thing. I find a lot of joy in taking an available part and just adjusting it a bit, whether that’s turning it around backwards (another favorite tactic of mine) or, as mentioned, altering the color so it’s still obviously LEGO but also something new via its characteristics.

your minifigs are so unique i’m a little worried about your mental state! (joke!)

what inspires you and gives you ideas for these amazing creations, do you find you ahve to draw out the idea first, or is your process more about mixing and matching then adding to it?

I almost never plan out ideas ahead of time, per se. Concepts usually come to me in one of two ways: 1) either a single idea pops into my head out of the blue (the Pillsbury Dough Fig happened that way while in the kitchen one night), or 2) I simply sit down with my bricks and see what happens. I’ll often revise a figure three or four times with the second method, always adjusting and changing until it finally feels right— the final product is very much about intuition and feeling, I suppose.

Every so often I’ll find a new part in a set that I know I want to use and set out to specifically make something with it, but such specificity is fairly rare for me.

I’m interested to find out what happens to all the minifigs after you stick them up on flickr, do you keep them and display them or do you dismantle them again? I’ve also noticed you don’t really sell any of your minifigs, was this also a conscious choice?

There are very few I keep intact simply because I like to have as many elements available to work with as possible. Looking at my desk right now, there are six total from this month’s Halloween calendar, out of thirty-one, that are still together. (The Bone Keeper, Portal Pete, and Staccato Selkis are three I can mention… The other three haven’t been revealed yet, so shhhhhh!)

And not selling my stuff is definitely a concious decision on my part, yes. My pieces are my creative materials so it’s hard to imagine giving any of them up. That would be losing the base-level resources necessary to build them! I have a hard time coming to grips with that so it’s just easier to hoard instead. 😉

what are your thoughts on the current friction between purist lego fans and the custom minifig community, the purists seem to shun custom minifigs because of all the cutting and paint, is this something you have thoughts on?

My experience with any friction has largely been folks criticizing me for cutting, painting, modifying, using clone parts, etc. And they have every right to; it’s their opinion. What I don’t approve of is those same people telling me or others what we can and can’t do. One of the joys of the hobby is the boundless creativity possible with these little plastic pieces, so why anyone would want to stifle that in others is beyond me.

we’ve got loads of readers on here who aspire to have the same talents that you have when it comes to custom minifigs, is there any advice or recommendations you can impart to our readers?

First, finding your best source of inspiration can make the difference between being stuck in a rut and a stroke of genius. Whether it’s watching certain movies, listening to music, or doing research on the Internet (all activities I find very helpful), finding something that makes you “ping” is important.

Second, be patient when you’re creating. Don’t rush online and post the first version of a figure you come up with; let it sit overnight once you think you’re done, because inveitably you’ll look at it the next day and find something you can improve.

And third, keep an open mind. If you’re posting a creation online, be realistic that there are some who’ll love it and some who won’t, although hopefully the latter will approach it with constructive criticism and not just “TH1S SUXX d00d!!!!111lol”. Your job as a public creator is to take all the comments in stride and hopefully learn from the suggestions.

you’re obviously a very active participant in the custom minifig and wider lego community, in your opinion what do you think is missing from the community?

Mmm, good question. If anything, I’d like to see more unity and respect between those who build figures and those who focus on brick-built MOCs. I definitely get the impression that there’s a unfortunate rift between the two groups, and I don’t think that’s altogether necessary. We’re all in the same hobby and should appreciate the strengths everyone brings to the table.