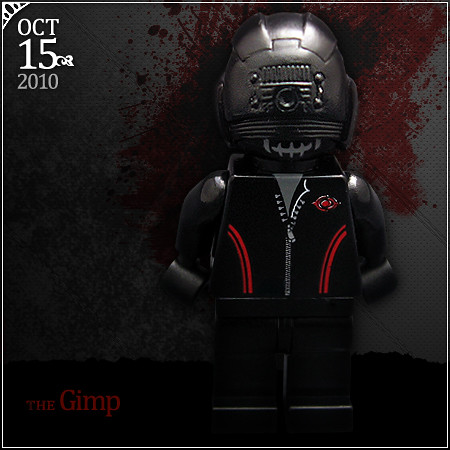 more morgan goodness, another creepy custom minifig by the good sir, we’re now half way to halloween so you can expect far more to come from morgan.

and as a little treat, here’s a little snippet from my recent interview with morgan (thanks dude!)

Hi Morgan, thanks for taking the time to be interviewed, for the readers of Customminifig.co.uk, you’ve been one of the leaders in the scene for quite some time, and you recent were featured in the Lego minifig book by DK, how long have you been making custom minifigs and what got you started?

Thank you you very much, and it’s my pleasure. 🙂

Although I’ve loved LEGO my entire life and have always tinkered with swapping figure parts around, it was really a Halloween-themed contest at the Fine Clonier a few years ago that really got me into customizing figures. At first I’d only planned on making a couple to see how it went, but ended up with something like 30 over the span of a few weeks. Since then, I’ve kept the bug and expanded my figures past Halloween to fantasy, scifi, steampunk– you name it.

I noticed that you take a lot of care in how you present each minifig complete with its own photoshopped background, and every minifig has its own narrative, is there any particular reason why you chose to do this? they really add character to the custom minifigs, and i can’t help but feel you should look at producing a comic or film with all these great characters, is this something you’re planning on doing?

When I was working on figures for the contest, I quickly realized that I wasn’t happy with “just” posting straight-up photos of each figure and leaving it at that. They seemed incomplete. As a professional graphic designer, putting an emphasis on presentation and a graphical narrative is key in a lot of what I do, so it was only natural that the same drive carried over into my LEGO creations.

The “flavor text” emerged the same way, in the sense that I discovered crafting a little something extra for each figure made them more real. The Halloween set has creepy quotes or lyrics, while my Star Wars figures all have specs like factions, weapons, and so on.

Naming a character is one of the most important steps to me– it’s the proverbial icing on the cake that really completes the thought of each one. In most cases I don’t usually have a name picked out for a figure until it’s photographed and the Photoshopping has started, and then it’s a matter of trying different names and titles until something just feels right, based on how the presentation has developed while working on it.

No plans for comics or films, at this point… I’m happy doing single figures. 😉

Alot of your minifigs are quite purist with a limited use of all the various custom minifig parts available, was this a deliberate choice on your part? why?

I’m inclined to say it’s deliberate, for the most part. I like to approach customization from a “hypothetical” standpoint: what if LEGO made an already existing piece in this color or that color, that sort of thing. I find a lot of joy in taking an available part and just adjusting it a bit, whether that’s turning it around backwards (another favorite tactic of mine) or, as mentioned, altering the color so it’s still obviously LEGO but also something new via its characteristics.