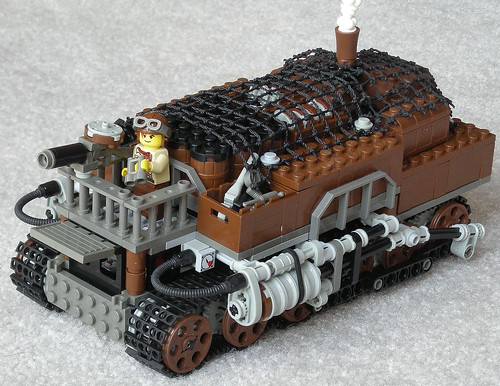 a pretty impressive and well decked out steam punk custom moc, whats missing is a custom minifig to go with it.

As the scale of the Great Steam War grew, so did the need for supplies to fuel the mechanized armies. It became inefficient to transport supplies using swarms of light supply vehicles, such as the Steam Supply Carrier (Mk. XVII). The Medium Steam Transport Vehicle was designed to satisfy these needs and could carry over four times the amount of cargo as the Steam Supply Carrier. It also featured several other improvements: better driver visibility, better defense (in the form of an automatic rifle), and greater maximum speed.

(It can move on its own using a built-in PF motor, pistons pump as it moves.)