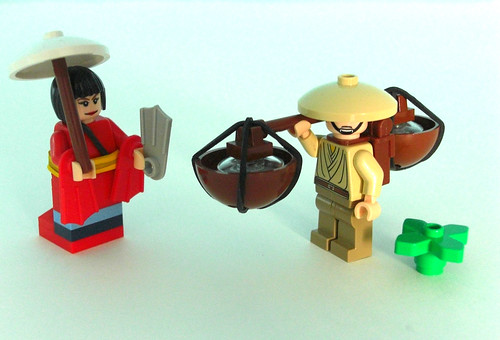 Lego came up with a samurai and ninja theme a while back, which I believe is now out of production, these two custion minifigs however would have been great in that setting, and there are tons of cool customizations on these custom Japanese minifigs. Heres some of them, the umbrella, the interesting use of the indiana Jones female hair, the flippers used as sleeves, and fans, the rubber band waist and lego brick skirt, the hat on the farmer minifig and baskets on the end of the poles, these two minifigs work really well and capture that Japanese atmosphere, i think they aren’t on a par with Hazels Japanese customs, but they are really good and would certainly look great as part of a vignette.