Posted on February 5, 2011 by Custom Minifig 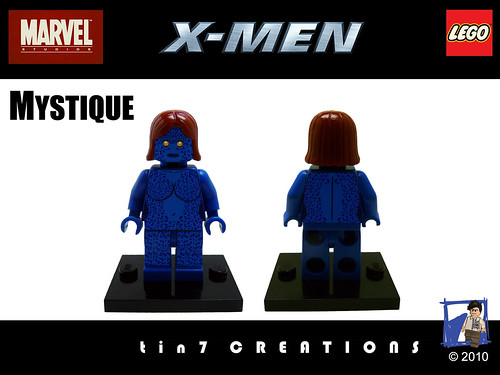 Interview with Tin7 – a custom minifig creation by tin7_creations

Hi Tin7, thanks for doing an interview with custominifig.co.uk as one of the most regular minifig customizers, i’m sure we’ll all enjoy find out more about you and your experiences!

1. So how did you first become aware of custom minifigs? what got you interested and decide to try it for yourself?

My Marvel minifigs are pretty popular, and it was ironically Marvel minifigs that got me interested on minifig customization. Redbean and Armothe did some Marvel minifigs; and I happen to come across them while searching on google for “LEGO Cyclops”. It was there that I learned that I can create torso decals on the computer. Then I also read a Sculpey tutorial on Minifig Customization Network, and began practising with Sculpey.

2. what was it like when you first started up customizing? was there anything in particular that you found hard?

The hardest thing for me when I first started customizing was sculpting on Sculpey. It’s still hard for me now, since I’m always trying to incorporate new techniques. I wasn’t a great sculptor to begin with, and I actually had been practising with Sculpey for about 3 months before I posted my first creation on Eurobricks. I just started by creating hairpieces, and different accesories and weapons. I made piece after piece after piece, and it was three months before I deemed the creation “suitable” for sharing with the online community.

3. You seem to have a real passion for comic book related custom minifigs and decals, was there a particular reason you chose to go down this route rather than say cutting and painting instead?

When choosing something to make into LEGO I always try to pick a theme with a large selection of characters, so I never run out of things to make. Comic books are a good choice, because even the most minor character can have a strong fanbase. I chose to customize based on the Marvel movies because it’s easier to connect with a mainstream audience, since many people began their “journey” with Marvel because of the movies. As for why I use decals… well, as you probably notice, my decals are printed onto sticker labels; and I just print them out and stick them onto torsos. I rarely cut and paint LEGO pieces because, unlike decals, it’s almost always irreversible. I think so far, in my short time as a customizer, I’ve only cut about 4 pieces of LEGO. I paint all my Sculpey creations though, just not actual LEGO pieces. Plus, my painting skills are sub-par, and decals always come out looking neater.

4. You’re one of the most regular customizers, how do you find the time to customize? what do you do out side of the customization world? work? other hobbies?

I’m a full time university student; but I’m graduating this year, and only have school 2 days a week now. Then I have two days of work a week at a mundane part time job. Then after I’m finished my homework, I would sit in front of the computer, open the Photoshop program, and begin to make decals. Sculpey work is time consuming though, but I try to work with it at least once a week; if I work at turbo speed with no distractions, I can pump out 3-4 Sculpey hairpieces per day, and then find time to paint them later.

5. How do you think the new lego collectors series and lego taking more risks with new minifig parts has changed your approach to customization?

I love it! I’ve always thought LEGO should make a series with only minifigs. I don’t like the plastic coming from China though. The series have given me many new great ideas; for example, I used the same Elf ears idea for my Nightcrawler minifg. I also enjoy all the new hairpieces and accessories. Many of them are useful, especially the female hairpieces, I hate make Sculpey female hair, braids and strands break off very easily…

6. Are there any particular customizers that you look up to or see inspiration from? why?

I enjoy the work of JasBrick, eclipseGrafx, Morgan19, they always have great presentation, and have many new innovative ideas.

7. Are there any particular favourite custom minifigs, lego minifigs or MOCs that have particularly stood out for you and inspire you?

Well… my favorite minifig is my own Nightcrawler minifig. As for any inspirations, I really like JasBrick’s Hawkmen army, as well as Morgan19’s Blight of Oz creations. I look at new minifigs every day, I see lots of new works, some are very professional, and some look more amatuer, but they all inspire me; I’ve been customizing for a few years now, and sometimes even when I look at new comers, their works are inspiring too. I like The Penguin’s (on Eurobricks) works, I also like looking at billbobful’s (on Flickr) stuff; his stuff is still a bit messy; but you can definitely see improvement both on Sculpey work, and creativity. What I don’t like is the painting though, no offense to any painters out there! There are also many great decal makers on the internet.

8. If lego could produce one set or minifig of your choice, what would it be? why?

The Avengers movie is coming out in 2012; it’s being released through Walt Disney Pictures. LEGO has the license to Disney, lets start with that. I think it would be a great money making idea, since many people (not just LEGO fans) like Marvel characters; plus, I’d like to compare my figs to official LEGO ones! I can make mine more risky, since I don’t have a cost factor like LEGO does.

9. Any planned minifig projects coming up?

I’m working on more Marvel minifigs as we speak. I already see some new hairpieces down the line (ie. new Pirates of the Caribbean female hair), which could be very useful for future custom minifigs. I will also resume making custom Harry Potter figs once I find out which ones LEGO are making for their new line in 2011 (since there’s no point in duplicating something that LEGO is already planning to make). As for new themes I’m planning… well… it’s a secret!!

Shout out to all AFOLs and all those who like, or have favorited, or posted my creations!!!

Thanks for asking me to do an interview! Hope this helps you out!