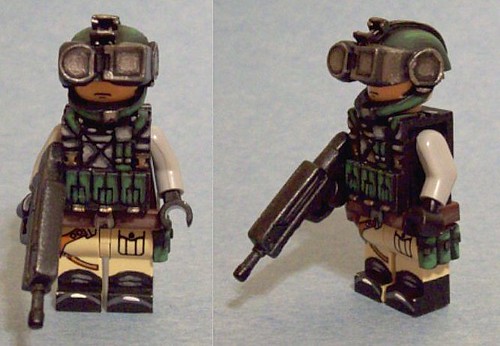 I’ve been in regular touch with KJ after coming across some of his fantastic custom minifigs such as the one shown here. so without further waiting, heres my quick interview with KJ a talanted custom minifig maker and all round nice guy

1. thanks for doing this interview! Lets get started – what first got you back into Lego? And what got you particularly interested in custom minifigs?

My son, Ethan, brought me back from about 25 years without touching a Lego. We would build a lot of stuff together (mostly Star Wars) but then he asked if Lego had any “army guys”. So I started looking around and of course there was nothing but Clone Brands (a definite “No, no” in our house). So we set out to try and make our own.

2. Who currently inspires your creations?

I have to give credit to Pedro, Hazel, Pecovam, Jas, Morgan and a host of others. I just click through Flickr looking not exactly for the best figs but the one that have something new and creative about them. I will fav those and come back to them when I am looking for ideas. But my son, Ethan, is a great source of inspiration for me. Ethan is even where my screen name comes from. I typically go by The Knight… Ethan’s middle name is Knight.

3. Of the Lego collectors minifig series – which minifig is your favorite? Why?

Has to be the Space Pirate from Series 3. I have always liked Blacktron and this is about as Blacktron as you can get.

4. Where do you get your ideas from?

I take from others, my son, video games and movies. Sometimes some weird idea just pops into my head… like that crazy Hazel Deep Eyes Samurai from the future I just finished. Don’t ask me where the idea came from. I’m a father with 3 kids that plays with Lego minifigs… you know something has got to be a little …off.

5. Whats your favorite custom minifig? (by any one :D)

Well pecovam did a custom minifig for me that is of a USAF SERE (Survival Evasion Resistance Escape), these guys are some hardcore Special Forces Trainers for the USAF. I have never had anyone make a minifig for me (except for my kids) and it really meant a lot to me. Besides it’s a pretty friggin awesome fig too.

I am a huge Chronicles of Riddick fan. I would love to see the armor and helmet from the Necromonger Soldiers be made. I have requested it from Hazel but I know he has a lot of things going right now.

7. What do you think is the most difficult custom minifig to create?

Out of mine, the hardest has been my Roach fig or the Space Marine 40k. Both of these figs involved an extreme amount of cutting, measuring and reshaping of TLC and custom pieces. Hardest to paint was Emile for sure though. Helmet alone took me about 3-4 hours.

8. If there was one lego set or character that you wished lego could produce what would it be?

ThunderCats and I heard there is a possibility it might happen. I love the ThunderCats especially Panthro. Still have all of my ThuderCats action figures from when I was a kid up in a box in the attic.

9. What tip would you give for people new to custom minifigs?

Never be afraid to make a mistake or fail. You have to fall down to get back up. Always improve your skills through trying new things. I am not that good at decals. So I have done some decals lately. Sure I have messed them up, but I would just start over or use my strengths to fix them. The Roach fig’s decals on the legs were all jacked up and I just came in there with my paint brush and touched up where I needed to and now it looks fine. In short, there is always something we can be improving on so never be afraid of making mistakes.

10. What do you think is missing from the custom minifig community?

More of a teaching mentality. I think that people need to give the “Noobs” a break. I see too often somebody bashing someone else just because they are new. Sure their stuff may not look as good as yours but just make it a teachable moment and help them refine their process. There is always going to be someone out there better than you at something. Try to learn from those who have mastered certain techniques. Go to people like Roaglaan for decals, Morgan for Photoshop, Ghost Soldier2010 and Shobrick for Photos, Pedro, Jas and pecovam for paint ideas, Chocobricks Customs (or Omicron) for interesting ways to use parts, etc. I am always willing to help too in anyway I can. There are ways of saying things to people (Noobs are people too) without being a total jerk and they will get the point. I really dislike when someone is trying to put someone else “in their place”, so to speak. Riddle me this: “Horace the Horse knew he was always the first horse on the merry-go-round until he realized he was the last.” Life is cyclical. You try starting to place yourself above others and you will soon realize you are the one at the bottom.

I hate to say it but I view “purist” as kind of the old money rich kid and custom houses as the upstarts. I have always been an upstart. Look at recently how many of TLC parts have been inspired by the custom houses. These are no coincidence. And you think Megablocks came up with that whole HALO idea by themselves… No way! They saw how well BF was doing with it and wanted a cut of the pie. Now they just got TRUMPED by Hazel’s new line of customs. Point is, I think the custom houses allow for so much more creativity and it is obviously catching on or Lego themselves wouldn’t have borrowed some of the custom houses’ ideas. So now a purist can use a part that was originally Arealight’s, BF’s, or Hazel’s, etc’s, idea and continue to call themselves a purist, just to call themselves a purist. Fact is a good number of these new TLC parts and characters and probably the mass popularity of the Lego Minifig all have the ability to customize them to thank. So, I don’t think anyone can truly call themselves a purist anymore.

My kids, Cassidy, Bella and Ethan; my parents, Ken and Sharon, who have always loved and encouraged my art (no matter how silly it was) and most of all God. I give all the glory to Him who allows me to wake up and breathe every morning. He is the one who truly inspires me most and gives me my ability in order to inspire others.

Thanks for asking me to do this. Gives me another Gold Star with my kids on the “Cool Dad” chart. If you have any other questions for me please don’t hesitate to ask. God Bless.