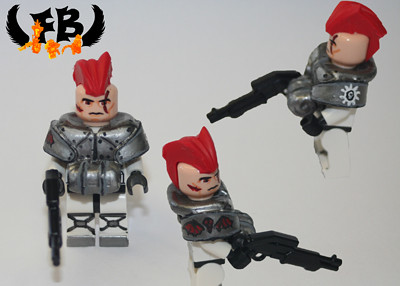 family brick is fast becoming a predecessor of Jasbrick, his minifigs are really creative, involving all the major sins of the lego purists, there’s cutting, painting, decal scraping and lots of gluing, whilst jasbrick is still a kingpin when it comes to painting FB really comes out trumps when it comes to smart custom minifigs. here is part 1 of our interview with FB

Tell us about yourself, if I’m not mistaken designing custom minifigs for you is a fairly recent thing ie in the last year or so? What got you started?

It is true that I have just recently started publishing my minifigures on Flickr and other forums, but I have actually been involved in creating custom minifigures for quite a while. Originally, what got me interested in custom minifigure creation, was the lack of Lego weapons. With that in mind, my first custom elements that I remember making (and still have a few copies of) was an AK47 and a large caliber sniper rifle. As I’m writing this, I remember what got me thinking I needed more weapons – the Lego series Dino Attack. I actually really loved those sets, and loved the theme of dinosaur vs. man – maybe it’s because I have always loved Jurassic Park, maybe my love of weaponry, maybe both. Anyway, I remember cutting up my first Lego – I made an order on Bricklink and jumped right in. I then resin-casted my items, and made an army out of them. The first custom figures I created really were only custom figures due to the fact that they had custom created Lego weapons – although it was here that I first started doing decals for my figures (rather roughly as well). Shortly after that Brickarms started releasing weapons which was a wonderful boon for custom minifigures – although this put me out of business, so to speak. At this point, I started re-watching the Star Wars movies and really falling in love with the theme again, and I decided I wanted to have more options for Star Wars minifigures. At that point, I started making myself various types of Clones/Stormtroopers – some realistic and some that were for my own legion. At that point I had several friends who started purchasing several of my Star Wars figures, and I focused much of my time doing Star Wars customs and selling at various places.

As I look through my Flickr stream now, I see some creations that are very different from anything mentioned above – what made this change? My answer is the same as many other customizers – JasBrick. The figure of his that really got me started into this new area was his Mandalorian Wedding – I still have that as one of my favorites and it will remain to be one of my all time favorites. After that I started looking at what he was doing, and thinking – I can’t do that, I don’t know how. And yet, I went out and bought a set of paints that I could use – only after working with the paints did I realize it – they couldn’t be using enamel paints because they just do NOT work! Once I figured out that for Lego figures, one should use acrylic paints did my figures start turning out well. After that, you can see a lot of what I have done in my Flickr photostream 😉

Some of your stuff is really fantastic, where do you get your ideas from? What’s the source of inspiration?

Where does my inspiration for figures come from? Hmm… That’s a difficult question to answer – I would start by saying that I find that most of my figures fall into realms of fantasy – I have yet to create any WWII figures and most of my figures are of my own imagination. Most figures that are realistic are figures/characters that are important to myself or my friends. In regards to my fantasy characters (and I’m including my post-apocalyptic figures, Steampunk figures, and whatever else one could dream up), a lot of the times I look at the creation process much like a sculptor. A sculptor will look at his material and find shapes that look interesting – from there they will start creating a design that flows around those shapes and colors; I find that as I build my figures it is much the same process. A lot of times I will get a product from Brickarms, Brickforge, Amazing Armory, or another vendor and as I look at it I think of what it could be. I suppose I should add here that I do try to go outside of the box when looking at materials – what can I make that it wasn’t intended to? Anyway, when doing a lot of my fantasy figures, I find that I’m never quite sure what the end product will look like until I’m done.

In regards to my non-fantasy figures (such as Iron Man, Predator, Boba Fett, etc.) – I try to be as accurate as possible while still attempting to stay as true to the Minifigure as possible. A lot of times, I go through a detail plan of what I want the minifigures to look like and how I’m going to get that look. When I run out of ideas, I go look at my movie collection and try to find something that I like, and branch an idea off from that!