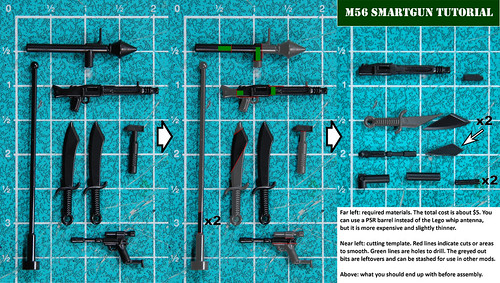 The below is from Catsy, i’ve lifted it just so everyone can read it…i think catsy should get an award not only for making this Mod to create a brickarms custom minifig version of the M56 from aliens, but also because he’s shared it with every one –

For tools, you’ll need the usual: hobby clippers, hobby knife, pin vise, razor saw, CA glue. The razor saw is optional but will make cleaner cuts for some of the modifications.

In lieu of the Lego whip antenna you can use a PSR barrel to attach the foregrip, but it is a more expensive solution. You can also pin the rear grip using paper clip instead of the antenna/barrel solution. Using the whip antenna will require only a 5/64″ drill bit for both attachments.

Cut as shown. The middle part of the RPG (with the grip still attached) becomes the foregrip of the M56. The end segment of the RPG will be the rear grip. You can also use the handle of the Lego hammer as the rear grip, which will look a little nicer and come with its own built-in pin, but you’ll have to figure out the diameter of the hole to drill. You’ll need holes in one end of the rear grip and the bottom stub of the foregrip as shown by the green lines.

Once you’ve cut the Dadaos as shown, it’s really a matter of filing and sanding the edges until you’re satisfied. You can also try to hollow out the triangular holes they’re supposed to have, but it’s a lot of risky work.

Cut off the grip, stock, and front sight post on the MG42. File the sides of the receiver a little smooth so that the Dadao fairings will lie flat against the sides of the barrel where they should. Drill two holes in the MG42 for the whip antenna segments or your alternative choice of pinning solutions–one vertically all the way through the part of the barrel just in front of where it meets the receiver, and one in the back where the stock used to be.

Get rid of the scope and grip on the Spy Carbine and smooth the bottom until it’ll lay flat against the bottom of the MG42’s receiver where its grip used to be.

Glue the rear grip into place where the stock of the MG42 used to be. Glue the antenna or PSR barrel segment into the bottom of the foregrip, and insert the pin into the hole you drilled through the top of the MG42 without gluing it–you’ll need to be able to swivel this a little bit in order to adjust the fig’s grip on the weapon.

Glue the head of the hammer to the top of the barrel in between the triangular fairings, just in front of the foregrip.

Aaaaand you’re done. I know, I make it sound easier than you think it is, but really it’s a pretty straightforward mod–the only significant amount of actual shaping you need to do is on the Dadao blades to turn them into the side fairings.