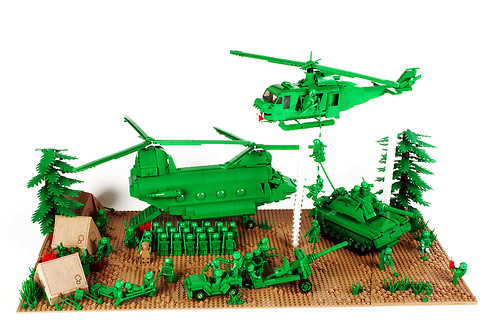 awesome, i think lego really hit gold with the army men, but at the same time they made a little loop hole. see lego’s mission statement means they don’t condone violence…which is kind of the point of ‘army’ regardless of if they are green army men from toy story or not. Nevertheless, its a bit of a moot point, given this is a site about custom minifigs and not the philosophy of lego, so the reason this photo, with no custom minifigs, is on this blog, is because i personally think that the lego army men minifigs have single handedly helped bridge the void that alienates the custom minifig community from lego, in that suddenly in its own round about way lego is helping custom minifig fans cater to their needs…now we can actually have sets of green torsos with m1 helmets (be it crap designed M1 helmets) to work off of.